Why Visit Rwanda for Wildlife Safari

Rwanda is small, and a relaxed safari destination. Travelers can discover Rwanda as an entire country on a safari that takes just 10 days. For all its diminutive size, a Rwanda Safari packs a punch in the wildlife stakes, and offers a rich cultural smorgasbord to boot. Seek out Gorilla, Chimpanzee, buffalo, lion, leopard, elephant, spotted hyena and more. Enjoy an once-in-a-lifetime experience during Rwanda Safari that is tracking mountain gorillas.

Rwanda has three main wildlife destinations, Volcanoes National Park, Nyungwe Forest National Park and Akagera National Park, each of which host a quite different fauna to the others. During Rwanda Wildlife Safaris Bird watching aside, wildlife viewing opportunities outside these national parks are limited.

Rwanda’s tapestry of habitats is home to a diversity of species including mountain gorilla, chimpanzee, golden monkey, hippo giraffe, zebra, leopard, crocodile and more than 600 species of birds. Ten percent of Rwanda Wildlife is designated as Important Birding Species.

Volcanoes National Park is where the mountain gorilla lives, along with 12 other species of primates. Ten habituated gorilla groups are open to tourist visits, with a maximum of 8 visitors to each group for a one-hour period per day. Nearly 200 of Rwanda’s bird species are also found within the park including 29 endemics, as well as giant forest hog, warthog, bush pig, forest elephant, buffalo, bushbuck, waterbuck, black-fronted duiker, spotted hyena, civet, genet, mongoose and tree hyrax.

Wondering about where to go in Rwanda? Here are the top travel destinations that you should not miss while on safari in Rwanda, the land of a thousand hills.

Akagera national park found in eastern Rwanda is a 2500 sq km of mainly Savannah land. The park is named after Kagera River that flows along Rwanda’s eastern boundary with Tanzania. The river feeds into Lake Ihema and other smaller lakes in and around the park.

The park protects an African Savannah landscape of acacia and bush with patches of open grassland and a dozen swampy lakes. It has exceptional levels of biodiversity and forms a large protected wetland. Akagera national park is the only Savannah national park in Rwanda and the only place to sight most of the large mammals while on safari. Whereas there are forest elephants in the other parks, it is very difficult to sight them. Explore the park in the comfort of your safari vehicle while on a game drive.

Game drives are conducted throughout the day in Akagera National Park, with the best times being in the morning and evening when you can see the most wildlife. On a game drive, you will be driven along marked trails across open savannah plains and woodlands in search of different mammals and bird species. The driver-guide will accompany you throughout the game drive to find places where animals spend the majority of their time during the day. You will be able to see all five of the Big 5 species, including the Buffalo, Lion, Elephant, Rhinos, and Leopard, Other animals to see in Akagera National Park include zebras, hippos, roan antelopes, oribis, Defassa Waterbuck, Semi-Aquatic Sitatunga, Eland, Giraffes, Topis, Bohor Reedbucks among others.

Another way to see wildlife in Akagera National Park is to go on a night game drive, which allows you to see nocturnal animals such as bush babies, hyenas, mongoose, owls, nightjars, civets, and leopard, this kind of experience is guided by an experienced ranger guide – night game drives usually start at 6 pm to 8 pm in the wilderness.

The Volcanoes National Park in Rwanda is best known for mountain gorilla trekking but the park is also rich with many other exotic activities to engage in. This park is part of the Virunga volcanoes which are shared between Uganda, Rwanda, and DR Congo. This park is an evergreen bamboo forest with grassland areas, swamp and heath in other areas.

The mountain gorillas are the prime attraction in volcanoes national park with gorilla trekking happening all year round. Because of the high altitude it is generally cold, especially early morning and the evenings, you are advised to carry a light sweater for these times. The park is located only 2 hours from Kigali in the north of Rwanda.

These are the key attraction in volcanoes national park which attract the highest number of travelers from all parts of the world. Gorilla trekking is the best wildlife experience every travel should not miss on his/her safari to Africa.

Volcanoes national park shelters over 340 mountain gorillas, which have been habituated into 10 families available for trekking. A gorilla permit in Rwanda costs 1500usd, a must have for each traveler to see these endangered species. The high cost of a gorilla permit is one of the reasons why Rwanda’s is known as a luxury gorilla trekking destination. Gorilla families in volcanoes national park include Titus family, Kwitonda family, Susa group, karisimbi family, Amahoro family, Umubano family, Sabyinyo family, Agashya family, Hirwa family, and Ugenda family all available for trekking every day. Each family is visited by a group of eight people for an hour.

Volcanoes national park is also home to forest elephants. These are mostly seen during forest walk and hike to Dian Fossey grave. Much as no travelers go to the park intentionally to see forest elephants, a look at these giants is an opportunity, which adds on the final experience. Other animals to see in volcanoes national park include buffalos, black fronted duikers, bushbucks, bush pigs, spotted hyenas, black and white colobus, white colobus, baboons, and red-tailed monkeys among others.

Nyungwe forest national park is found in western Rwanda and is one of the world’s most beautiful and pristine rain forests. It is dominated by a series of mountains, originating in northern Uganda and Congo, running south through the Rwenzori mountains, western Rwanda and Burundi, to the shores of Lake Tanganyika.

Nyungwe forest national park offers scenic views over the Lake Kivu and sometimes the Virunga ranges on a clear day. The forest has an extensive network of well-maintained walking and hiking trails to various waterfalls and viewing points. The prime activities in Nyungwe forest are chimp trekking, bird watching, colobus monkey trekking and the canopy walk.

Nyungwe forest is home to two wild chimp communities that are habituated for chimpanzee tourism. One of the groups is in Cyamudongo section of Nyungwe forest and the other around the Uwinka area of the forest. The forest is home to about 400 chimpanzees. While viewing chimpanzees is not guaranteed, you will enjoy learning about these creatures and their natural habitats from your guides. You are expected to be at the briefing area as early as 5.00 am in the morning. This is because chimps are mostly likely to be seen early in the morning and they tend to move about which requires one to be active as you follow after them. However whether you view the chimps or not, the experience in the forest is rich as you watch other primates, butterflies, several trees and above all the freshness of the air.

Nyungwe National Park in Rwanda is one of the best places to spot small primates in Africa. Although Chimpanzee tracking is the dominant primate activity, some tourist come with the purpose of seeing the other smaller primates like the Angola Colobus Monkeys, Dent’s Mona Monkeys, Grey Cheeked Mangabeys, Hamlyn’s Monkeys, L’Hoest’s Monkeys, Olive Baboon, Red tailed Monkeys, Silver Monkeys, Vervet Monkeys, White and Black and Colobus monkeys. Groups of golden monkeys have been spotted in the park but because of their small numbers, finding them is difficult. The most popular species among tourists is the arboreal Ruwenzori Colobus that feeds on leaves and is identifiable by the contrasting black and white (tail and whiskers) colors. All the monkey species move in troops that can go beyond 100.

Nyungwe forest national park is a high altitude mountain forest ranging between 1600 – 2950 meters. The birds in Nyungwe forest are mostly found in the trees, shrubs or the ground at the edges of the forest next to the tea plantations. Some birds are shy and therefore more easily heard than seen like many forest birds. Among the frequently sighted species are the Rwenzori Nightjar, White-tailed Crested Flycatcher, Kivu Ground Thrush, the Handsome Francolin, Dwarf Honeyguide, Greatblue and Rwenzori Turaco, montane Double Collared Sun and the Red- Throated Alethe. There are well maintained trails which you will take while birding as well as trained bird guides that are based at the nyungwe forest.

Therefore, the Volcanoes, Nyungwe and Akagera national parks are rich in diversity. A variety of animals and birds make your Rwanda safari complete. Book a safari to Rwanda national parks, trek mountain gorillas, Chimps, Golden monkeys, birds and other primates. Enjoy, stay in this peaceful areas rewarding you with a life-changing experience. 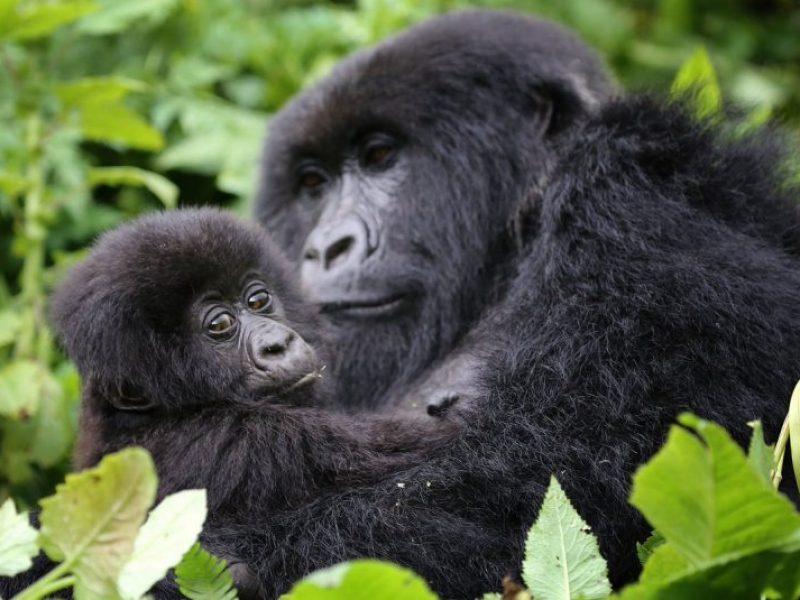 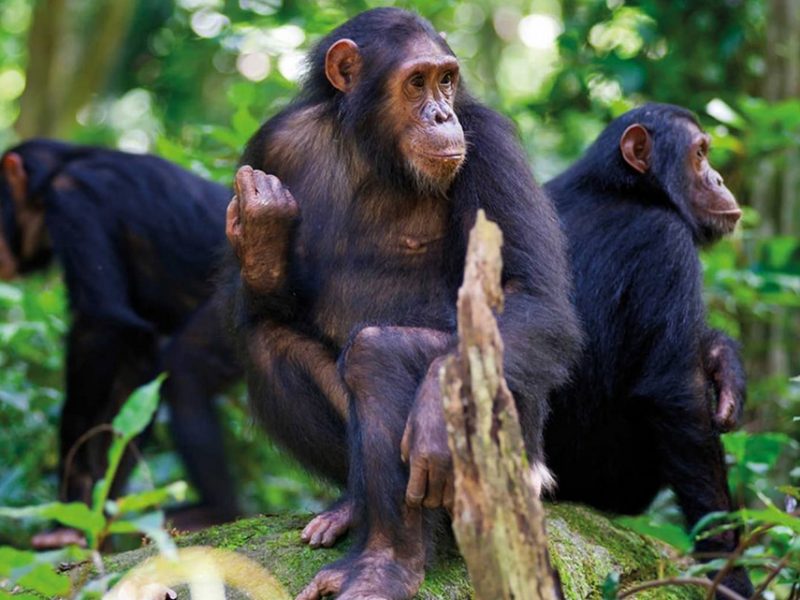