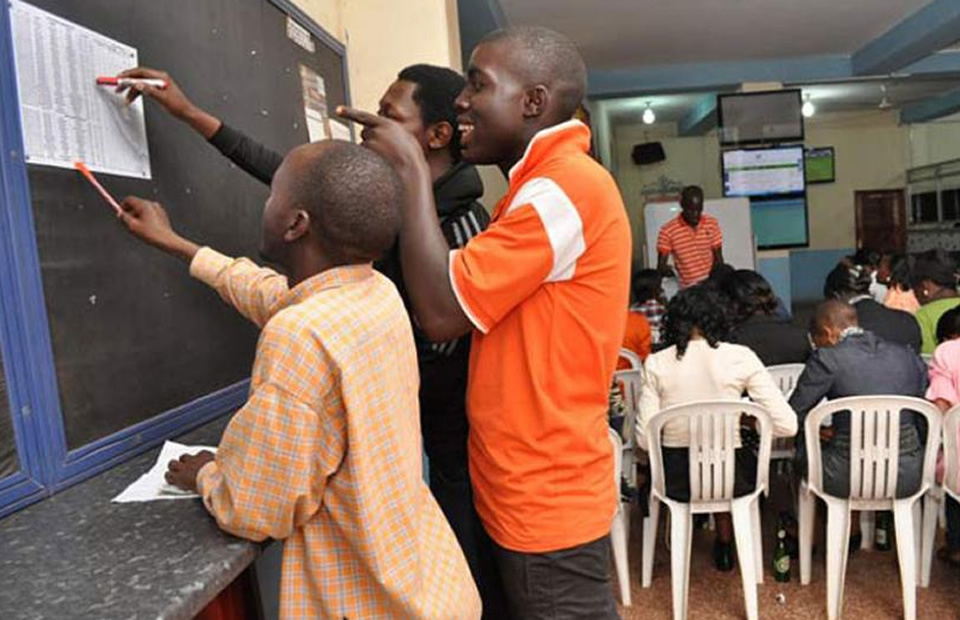 Sports betting in Kigali: A New Era of Addictive Gambling

Sports betting shops can now be found in every nook and cranny of Kigali, Rwanda’s capital. In Remera, for instance, the building that used to house a leading bank has been converted into a sports betting house.

The general trend this alludes to is that any strategic building that has been vacated, or any new development in any strategic location, is now being snapped up by betting shops.

I recently took a friend of mine to watch an English Premier League match near Amahoro Stadium and what surprised him was the significant number of laptops that the gambling shop had invested in. And all the laptops were occupied – with a long list of others waiting to use them for betting.

I asked the owner of the betting shop if a product like betting needs such kind of ostentatious display – since people are going to gamble anyway – and he said they are just managing customer experience in this digital age.

According to a blog article titled “Going All In: The Criticality of Customer Experience in Betting and Gambling” by Karen Smith, “The popularity and proliferation of opportunities to ‘bet-in-play’ has compounded the demand for streamlined and robust customer experience.

“Betting in play is the ability for a user to place a bet, typically on dynamic odds, during a match. As a rule, these customers demand quick navigation, dynamic and engaging content, and fast performance times to successfully process their journey,” says Smith.

In some of the betting shops in Kigali, you will find giant screens where people can watch live matches.

But the walls not only just found TV screens to broadcast matches. Virtual games like horse racing, dogs racing and spinning wheel, among other imaginable virtual betting games, can also be found in these shops. And people are now not just betting on live football games, but also virtual football ones where each game can last only one minute or less.

There are some shops where people can now play casino games, both brick-and-mortar, and the online ones.

And even when it’s past midnight when other people are sleeping, you are still going to find the bettors hooked deeply on the computers, either losing or getting money in the process.

A new era of addictive gambling

Gambling has now become a reality in Rwanda.

However, on the flipside, people gambling themselves to sheer poverty or even death are not fairytales or things we only watch in movies. And the inventor of sports betting unwittingly bred a new era of gambling.

Deo Habimana is a 28-year-old motorcycle-taxi driver in Giporoso. He says he began betting some few years ago and, as time went by, his “hobby” started consuming a more significant chunk of the money he earns in a day.

Habimana readily admits that the money he gets at the end of the day is minimal compared to what he injects in betting – yet he cannot quit.

Habimana also admits he’s aware that he’s spending his hard-earned money on an addictive habit, but insists betting also helps him to relax while also waiting for that time he will hit it big time.

“I’m always inspired to bet after I’ve heard about the good fortunes of those who have hit jackpots. They are just fellow bettors like me, and I hope that my day will also eventually come,” he says.

He adds that when he doesn’t have money to bet, he resorts to the desperate solution of pawning or even selling some of his household goods to sustain the habit.

“Often, I bet even the last coin I have in my pockets, and this can be quite devastating when you don’t have food in the house. However, I always pick up the courage to again visit the betting shops since I believe that I stand a chance to win big,” he admits.

Claire Ijabiro works at Lucky Sports Bet in Remera, a Kigali suburb. She confirms sports betting has now become a big business and that’s why many betting shops are opening up everywhere in Kigali. But she points out that they don’t allow those below 18 years to participate.

She explains that her company’s starting amount for betting usually is Rwf300 and may sometimes go up to millions. And the amount won depends on the odds or standards a particular team is given. Gamblers typically bet on international teams.

“Sports betting is now just like any other business and, in recent years, it has become quite lucrative not only in Rwanda but in the entire region. Lucky bettors may win millions of Rwandan Francs, and it’s handed to them without demur,” she says.

Many gamblers say they have made a substantial amount of money from the practice.

Apart from placing one’s cash on a team which is seen as a favourite to win a game, as the odds attest, Ijabiro admits winning in a sports betting game is all a matter of luck.

She adds that on a typical day, a betting company may make a million francs and even over, mainly when the playing teams are big guns.

“The amount of money we earn a day is determined by the teams out on the fixtures. When it’s the English Premier League, for instance, very many people bet and we also get to earn a lot. We can earn Rwf800,000 or more,” she reveals.

This shows how lucrative this business is, yet not all people view it with a similar lens.

Jean Pierre Niyonsenga, who works for a betting company he doesn’t want to be mentioned here, says betting is a gambling business capitalizing on addiction and curiosity.

“People spend a lot of their cash on games they’re not even certain of winning. You find that one bets in many games but gets nothing out of them or wins in only a few of them, meaning the rest of their money went to waste, which isn’t wise,” Niyonsenga says.

“I do bet sometimes, but it’s something I do only for the fun of it. I am not against the game, especially if the person doesn’t do it excessively,” he says.

But Nancy Iradukunda, a mother of three, says she is against gambling in any form. She wonders why a rational human being would risk their cash on something they’re not sure of gaining from or even having any influence over.